His Game is Mud: Bill Perrine, of Homer, makes wood-fired pottery using raw materials from the Tully mudslide of 1993 View full sizeProvided photoBill Perrine's kiln
It had been 16 years since a rain-soaked chunk of hillside gave way, and most of the 55 acres of chewed-up soil was covered once again in vegetation. But the spot of red earth that remained exposed and barren after the 1993 Tully mudslide caught the eye of Bill Perrine, of Homer, that day in 2009.
"I thought it had potential," said Perrine, whose studio is called Split Fire Pottery.
Perrine is a rarity: He is among the estimated 2 percent of studio potters nationwide who dig up and mix a portion of their own clay rather than buy all of it by the bag through suppliers. That's according to Bill Jones, of Westerville, Ohio, a member of the American Ceramics Society and Editor of Pottery Making Illustrated.
"Digging your own clay is very time- and labor-intensive" Jones said. "And most local clay just melts."
Decades of experimentation with pottery and an unusual type of kiln contribute to Perrine's success with clay harvested from the Tully mudslide, which happened April 27, 1993, when a wave of mud slammed into four houses, forcing 15 residents to evacuate and trapping three people in sticky ooze.
For 26 years, Perrine made pottery with a common electric kiln, one in which a switch is flipped, the heat is evenly distributed and the kiln automatically shuts off. Then Perrine purchased a manabigama, a Japanese-inspired kiln that burns wood to create the heat.
It is temperamental but allows Perrine to fire various types of clay and get a finished product that is distinctive.
"The advantage of wood is that pieces of the ash fly up and settle on the pottery to give it a look you don't get with an electric kiln," he said. There is an irregular, speckled glaze preferred by some collectors. "Those spots are tiny pieces of ash".
In addition to the ash freckles, the wood sends up a flame that "caresses" and shades the pottery to enhance the unusual characteristics even more.
"There's an unknown variable when you fire with wood," Perrine said. "You never know exactly what you'll get until the process is finished and you see what the flame and wood did to your work." View full sizeMike Greenlar / The Post-StandardBill Perrine's finished pottery pieces with 15% to 40% Tully clay from the Tully Mud Slide.
Bill Jones claims there are so few manabigamas out there that "there's actually a map that shows where each one exists in the U.S."
"Most potters would love to have one," Jones said.
It takes two months to prepare the kiln for a new wave of artistry, all the more impressive considering Perrine is a full- time art teacher at Huntington School in Syracuse. Pottery is something he does in his spare time.
The process begins with harvesting three or four types of wood from trees on his expansive property. The different woods vary the ash patterns that fly around in the kiln.
Dozens of bottles, bowls, mugs and casserole dishes are crafted at the wheel and then carefully placed within the kiln before the opening is sealed off with bricks. For two days, the fire is stoked around the clock while the clay roasts, cures and hardens. The end result is as close to ancient pottery of the Japanese and Native Americans as one can achieve in the 21st century.
The anticipation of nature's finishing touch is what inspired Perrine to seek out other natural elements in Central New York to work with.
At the mudslide site, the topsoil is turned upside down and a layer of clay is exposed. Perrine drove around three years ago to see if any of the red earth would be suitable in the relatively low temperature that exists at the back of his kiln.
He wrapped a coil of the clay around his finger and when it didn't crack, he contacted the property owners for permission to take some home.
"They were so helpful. They helped me dig it up and they brought their ATV to get the buckets to the car," Perrine said.
The 8-gallon supply has lasted through two years of firings. Today, one in five items he makes includes approximately 15-percent Tully clay mixed in with commercial clay material; those pieces are identified by the letter "T" stamped on the bottom.
Armed with U.S. Geological Survey maps, Perrine is now in search of the next great mud discovery in Central New York.
"I'm going to try Pratt's Falls to see if I can find a whiter clay from the all the limestone around there," he said. He will look in pools of water where time and water have eroded rock into something fine enough to sculpt.
After all, he said, "there's a large clay seam in Syracuse, which is how Syracuse China got its start."
For more information on Bill Perrine's work, go to splitfirepottery.com. To purchase the pottery, go to etsy.com/shop/splitfirepottery. To see Perrine's pottery on display, his next local event is the Syracuse Arts & Crafts Festival, July 27, 28 and 29 in Colu
Posted by Bill Perrine at 9:02 AM No comments: 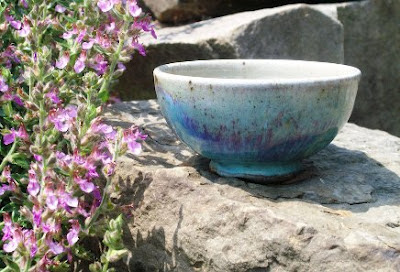 Hmmm ... Always a tough one to answer. I like the ability to share my work, world-wide, online. I have sent purchases as far as Australia, Europe and Asia.  I find I have a much better chance of reaching someone that likes my work, especially the unique or more elaborate or outstanding ones, when online. Not that I don't find people that are interested in my pieces like that around here locally, perhaps just not as often. I will always get a few gems or as we call them "gifts from the kiln gods" that are in a league of their own and I do charge a bit of a premium for those. Where I live and the areas I do shows in, there is a mixture of folks with a variety of tastes and I have found though online sales there are some areas that have more of an interest in the arts and appreciate the beauty found in handmade, wood-fired pottery. 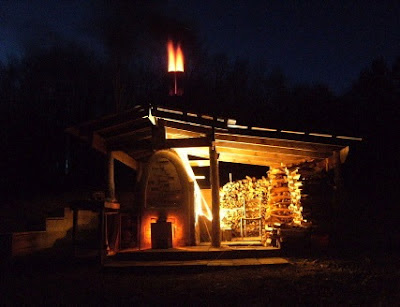 I do however, like the ability to meet new people and having a chance to interact with them, a lot of times, answering questions about how a particular piece was made or especially with me being a wood-firer, a lot of questions about the process and my kiln. What caused something they noticed on the piece that they don't usually see in other processes.  I do enjoy sharing what I'm passionate about (can you tell?) with folks that are interested in hearing it. I also enjoy seeing the smile on someones face when they see something that strikes a chord with them. I realize at that moment, that they are seeing what I enjoy seeing in my work. There has to be something pretty special about it, that would make me want to immerse myself in the depths of the work necessary for wood firing. It is a lot of work!!  But when I get those "gifts", it is so worth it. 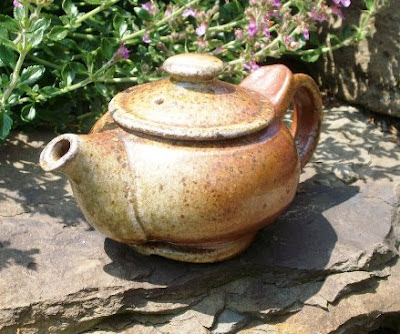 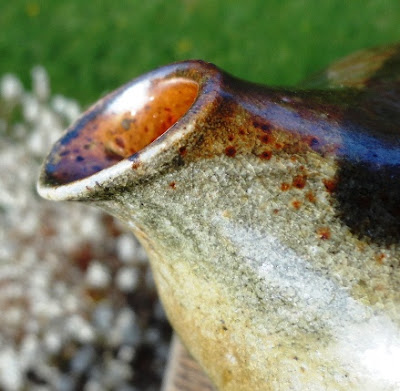 There are some pieces that I don't part with, or at least not for a while, up to two years sometimes, before I put it out on there for someone else to fall in love with. There is something about pottery that is very intimate. The touching and using on a daily basis, that creates a special bond. I can imagine there are some readers that are thinking, "This poor guy has lost it", and they are free to think what ever they want of course, but I know there are some that have that "favorite mug", or special bowl or platter for when guests come over. They will put it out as a centerpiece with snacks, veggies and dip or a meal even on it. I think it takes the wisdom that comes with age about taking the time to slow down, even a little, to enjoy life's little pleasures... 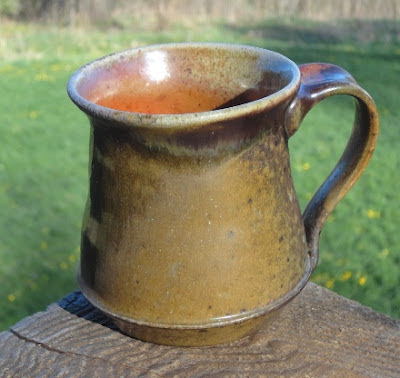 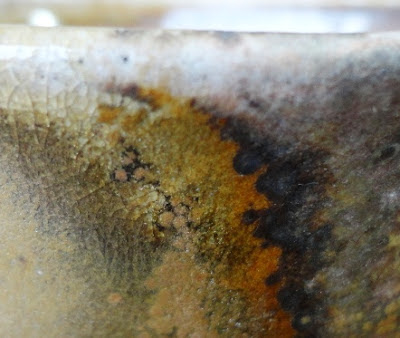 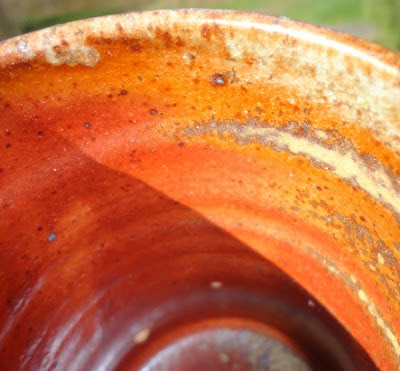 that favorite mug or glass perhaps. I bet some people even keep those pieces out on "display" all the time to enjoy daily as a "life enriching item."  Wood fired pottery is often not "loud", but has a more subtle presence to it. That mug that you pick up to drink from and pause to notice something new on it, the way the ash sprinkled one side... telling the tale of the firing, which side the fire came from or an edge where the color changes.. before drinking from it. 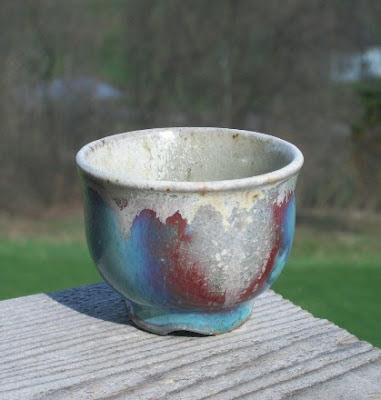 So, getting back to the age old dialogue of shows versus online, I would have to say... do both!  How else can you get the opportunity for more people to be able to enjoy your work that are beyond "local" and enjoy the interaction and sharing of your "world" with interested and interesting people? 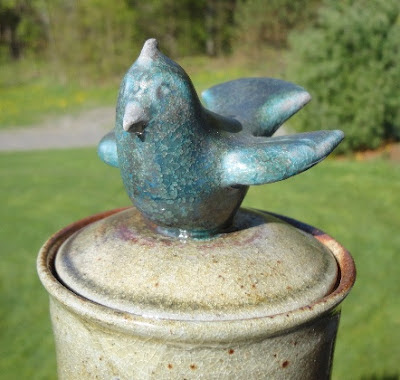 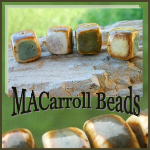